In 1972, a ‘reptilian humanoid’ creature was claimed to be seen by four witnesses by Thetis Lake, just outside of Victoria.

With its location about 20 minutes out from Victoria on Vancouver Island, the Thetis Lake area is a popular spot for hiking, swimming, fishing, and boating.  Established as a regional conservation area, the first in Canada, in 1958 Thetis Lake consists of roughly 831 hectares of protected forest and parkland.  Seems like a fairly picturesque place but then again so is Loch Ness.  On August 22, 1972 two local teens claimed to have been chased home from the lake by a creature they described as looking vaguely like something resembling Gill-man from the Creature of the Black Lagoon (very 70’s).

An officer who took the statements of those two boys believed that they were sincere in their claims.  This appeared to be verified when two men came forward four days later claiming to have seen the same creature on the opposite side of the lake from its first appearance.

The same day that the second group of claimants had come forward, August 26, 1972, a potential solution appeared to present itself.  A man called into the Province newspaper claiming to have lost his pet Tegu lizard in the area of Thetis Lake the year before.  However, the police felt that this type of lizard in no way matched the creature as it was described by the eyewitnesses. 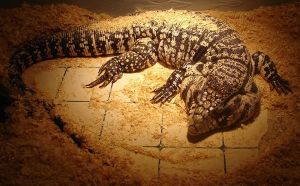 Tegu lizards can grow up to 4ft in length but there is definitely nothing ‘humanoid’ about them.

Despite having police support, no additional sightings have been reported since that summer in the late 70’s and, recently, one of the original two witnesses came forwarded to report that the original story had been a lie.

Written in the Past